I have not been to a wedding in more than 17 years but in the last week we’ve received two invitations to weddings, plus we were invited to another about 6 months ago.

Last week I has a nice surprise at the post office when I received an invitation to the son’s wedding of a best friend back in Canada.

We’ve been friends about 34 years or so and though most of these years had us living in different locations, the minute we get together for a coffee (me) and a cup of tea (her) it’s like time has stood still for us.  For our friendship.  I’m not sure I’ll be able to attend the wedding as our plans for summer are yet to be determined (complicated) but if we’re anywhere near, I’ll be there. 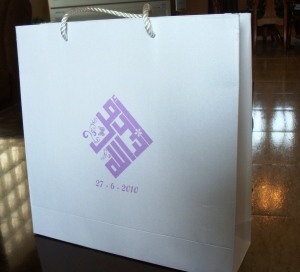 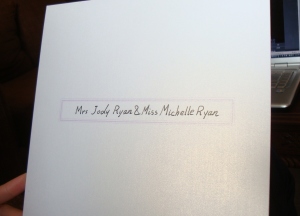 gift received, along with the invitation

I met the brother and his fiance last weekend at dear daughter’s gym competition.  This is an ‘arranged’ marriage, in that the bride-to-be was chosen for the husband.  Their meeting and engagement has all transpired in the last 2 – 3 months, but in seeing them together…. holding hands, touching one another, warm glances to one another I sense they are happy.  Maybe even already in love.

Not ever having been to one of these before, all I know is it will most certainly be a lush, extravagent affair with 500 women guests who will all be dressed to perfection, hair coiffed, manicures, pedicures, make-up all around.  Dear daughter and I best get a move-on to find outfits appropriate for such an occasion, along with a gift to give to the couple for their new life together.

The other invitation we received was to attend the son’s wedding of a family that dear husband met through business dealings here.  We were invited to attend the wedding in Mumbai, all-expenses paid.

I didn’t know anything about Hindu weddings so when the invitations (note the plural here) were delivered, the father and sister of the groom explained it all to us.  There were to be 5 days of events, with hundreds, if not thousands of other guests at each.   All I could say was – WOW!  Let me take you through it…..

the invitation, as we personally received it from the father and sister of the groom

envelope containing all the invitations 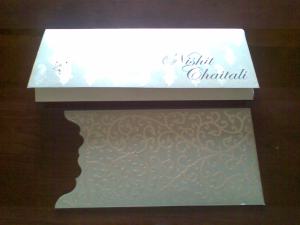 so beautiful - wish my picture of it was better!

The family names, their company names - which was a lot!

As you can see, 5 days of spectacular events.  They explained what would happen at each one.

We didn’t attend for a couple of reasons but mostly due to my feelings of discomfort in going to Mumbai, in particular, right around the anniversary of the bombing there a year ago.  I know my husband regrets this decision made on my part.  But, I have to go with how I feel.

These weddings, or marriages, each hold somewhat different meanings and traditions both culturally and religiously.

Recently I read the new book Committed by Elizabeth Gilbert  of Eat, Pray, Love fame.  In it she writes of coming to terms with getting married for a second time.  She also writes of the vastly different ways people around the globe define and commit to their marriages.  The different traditions, expectations, risks, responsibilities, etc.  It was fascinating to learn of how it’s changed throughout history and how it can be so different for each of us depending on where we live, when and how we are raised.

The 20th Anniversary of my own wedding will soon be upon me.  Has our marriage been what I expected?  Pretty much.  I think DH and I had a good understanding of each other going into it.  Mostly, we had a determined commitment to each other and to the idea of what our marriage could be.

To be sure, we have had our moments – but they have been few.  We kid each other a lot about getting through the next 30 or 40 years if we are so blessed.  But I remain committed to this idea of marriage and so look forward to witnessing the beginnings of others…. for their own reasons, in their own uniqueness.

4 thoughts on “Year of the Wedding”