The day began with victory and celebration.  Being a proud Canadian, I decided to forgo sleep last night to watch the gold-medal-deciding Olympic hockey game between Canada and the US.  It started at 11:15pm here, ending shortly after 2am.  Canada was in the lead going into the 3rd period and with about 24 seconds left to play the US team scored to tie it 3-3 sending the game into overtime.  Quickly in the overtime period Canada scored and the whole country erupted with cheers of pride and glory! Hockey Glory!

After 2 hours of sleep, the alarm went off which I had set to watch the Closing Ceremony at 4:30am Doha time. Throughout both events I was in touch, on-line, with family in Canada, friends in the US and fellow Canadians who were travelling in NZ.  How fantastic!

Back to the real world, it was 7am and time to take the kids to school.  Along the drive in I noticed the skies began to change and grey clouds started to roll in.  I was needing a little more sleep so once home, I tucked myself into bed to catch 3 more hours.  Upon waking and eating lunch, a downpour started.  Not in the skies, but in the life of a young girl who had recently arrived in Qatar seeking a better life for her family.

Our housekeeper’s daughter arrived about a month ago for a job providing her a higher salary than she could make in her homeland of the Philippines.  She left behind a husband and her children to come here.  A daunting and uneasy task.

During the first week she was here I asked her mom how it was going .  Her reply was “not very well”.  Her boss, her ‘sponsor’ was “not being so nice to her”.  Less than month later she turned up to work today only to receive a letter saying services are no longer required and she’s being sent back home.  Not only that but the company will be deducting the agency fee out of her salary.  Which leaves her with nothing.

I see the pain on her mother’s face.  She has been living here 18 years, though fortunate to have had good, fair and honest employers during this time.  She feels helpless.  She can find no way to help, no words of encouragement.  She was so pleased to have her daughter living in the same country as her, for the first time in years.  She’s heartbroken.

I tell her to leave her work here and go be with her daughter.  She insists she wants to complete her work for us, but would like to bring her daughter over for the rest of the day so they can try to figure out the options.  Would I mind this?  Of course I didn’t mind, so offered to collect her and we set off together to pick her up.

No reasons were given to her for the termination.  For whatever reason, someone has decided she is no longer wanted or needed and she has no choice but to get on the plane and return home having gained none of the expected advantages, but rather poorer for the experience.  Dark, gloomy days seem to lay ahead for her and her loved ones. 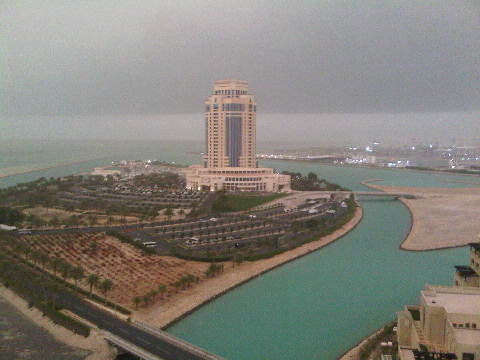 grey skies over Doha, from West Bay towards the Ritz

During the evening thunder and lightning disrupting the skies and the rain finally poured down.  Heavier than I’ve seen it here, for many years.

She could go to the labour department and see if they might be able to help.  In the 10 years we’ve lived here most people we’ve known who have tried to exercise their rights or find some fairness in the system, only ended up in worse distress and with less money in their pockets.  Our advice?  Sad as I was to deliver it, cut your losses and go home.  Difficult as it was, her Mom  believed the same.

As her and her Mom left our house to go home I gave the daughter a hug, some more money and told her we were so very sorry for what happened to her today.

We’ll see if the skies clear tomorrow.  They may still be thick with darkness. If nothing else, I pray they will clear enough to provide a safe journey home to a land of love, for one young mother.