It’s just what I see ….. another slice of my world, this past week.

It seems like I was uploading photos just the other day, but I guess it has been a week already.  Each week for the past 3 weeks, a different member of our family has been home sick  so perhaps that’s why I’ve been busy and time has passed so quickly.  However, trips to the doctor are not quite so bad as they used to be. We have a new clinic and it’s located about half the distance from our house as the old one was.

In Qatar many businesses and offices have separate areas for men and women. The medical clinic is no different.  Oldest son has to wait in the men’s area of the clinic while dear daughter and I wait in the ladies section.  The same goes when you move on to the lab to have blood work done… separate rooms, separate waiting areas.  Even when you go to pick up prescriptions….separate line-ups, separate waiting areas.  Though you  may still be standing right beside a man in line or seated only a couple of feet away, there still exists the need for a designated separate  area.

waiting to see the doctor, DD and I sit in the ladies section while oldest son waits in the mens section

Rain, glorious rain!  We had our day of rain.  Well, really it was only a couple of hours of rain on and off throughout the day.  It might be all we get this year…. so kids in the neighborhood went out to play while they had the chance! 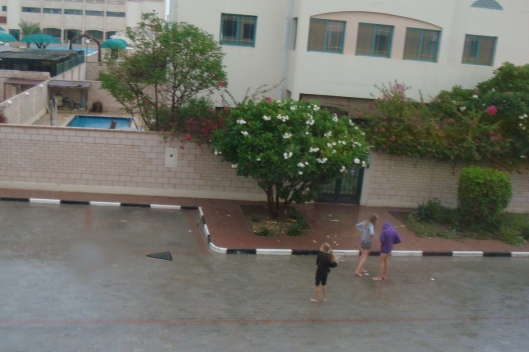 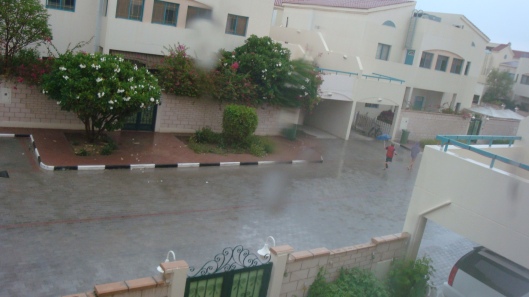 A real soaking was fantastic as we get the garden ready for bedding plants.

Below is just another funny store sign, seen somewhere along the city streets. 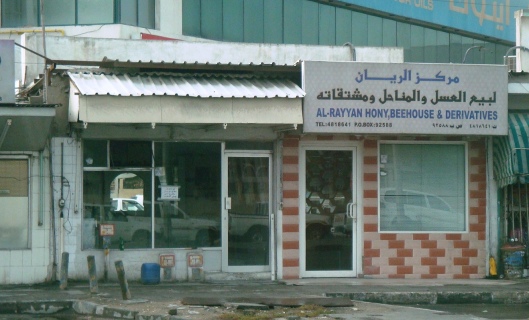 As you can see, nothing but the best in our neighborhood!  However, I am just joking considering it’s surroundings…  and shouldn’t judge it as I’ve never been in the store.  Shops like these are found throughout the city and serve a purpose just as little corner stores do in any neighborhood. 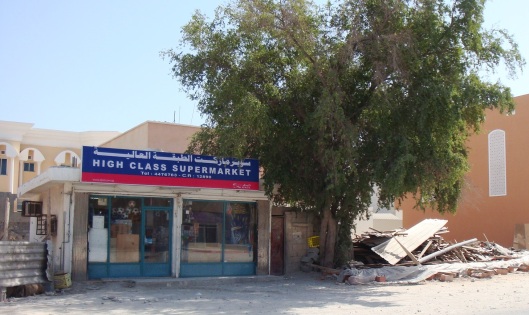 Now here’s what Qatar likes to show the world.  This is one small part of The Pearl Qatar development.  I think this is the Qanat Qartier, designed to be like Venetian waterfront living.

Or this, a residential apartment building called the Zig-Zag Towers.

I also visited the souk but will post those pictures separately when I have a chance. Here’s one picture though, to give you an idea of what a more ‘traditional’ area in Qatar looks like.

Traditionally, this is where I sign off until next time….

(as always, if you want a closer look just click on any of the photos)