Every day, soon after I wake up and shower I open our bedroom curtains and see my neighbor’s house across the street.  Only our neighbors don’t live there any more. Wednesday night the family flew to China to start a new chapter in their life.

When we first settled on this compound back in 2001 there were few houses occupied.  Four to be precise.  Two occupied by American military personnel who were always coming and going and kept to themselves.  One occupied by family of the owners.  The other occupied by an American family that moved away probably 6 years ago.  They’ve all since moved on.

We moved in, as did about 4 or 5 other families that worked for the same company as dear husband.  The company housing policy had changed and whereas before they basically told us where to live, they now provided us a housing allowance and we were able to choose a location, a home.

At the time, there were plenty of villas to choose from and the rents were reasonable.  Almost 1/3 of what we currently pay.  A few years back housing was in short supply and subsequently rents shot up. At that time, there were probably 30-40 families on a waiting list to get into our compound alone.  That is not the case anymore with the abundance of houses on the market.  Now, there are 12 villas empty with more to come in the following days.

This compound, however, has always been a blessing for us.  First and foremost the maintenance provided is excellent, which is something out of the ordinary for these parts.  Second, it was always a great mix of people.  A total of 86 villas, with families of many nationalities, many cultures.  It soon came to be that there were many Canadian families living here, which was an added bonus.  However, our friends and neighbors were a mix of Canadians, British, Australians, South Africans and I’m not sure what else.  Though we didn’t particularly mix perhaps with our Muslim or Arab neighbors, we all got along just fine.

About 5 years ago the exodus started.  Many Canadians moved home as business and opportunities were booming.  Each year, more and more have moved away either to their home countries or to new beginnings elsewhere.  New families moved in but for whatever reason, we didn’t get to know them.  Perhaps because our children grew older and didn’t play around the neighborhood so much with the other kids. We were no longer required to supervise them at the playground or the pool.  They could go on their own.  We could go on our own.

I went to the pool today, a Friday morning.  It used to be there would be 5 to 10 different families there on any given Friday morning.  We would spend the day together.  Catch up on each other’s news.  Maybe have a spontaneous BBQ dinner together.  This time of year, we would exchange our plans for the summer.  Today there was one family there that we keep in touch with – a little.   We filled each other in on our travel plans.

I grew sad and lonely thinking about all those good times.  Today, it was nothing but quiet.  After an hour or so, I packed up my book, towel and cold water bottle and headed back home.

I can only imagine it being similar to when we grow old and our friends start to die.  Slowly, one by one we experience the loss in losing  friends, a parent, brother, sister, cousins, aunts, uncles, neighbors and before you know it you’re pretty much the only one left standing.

But back to our neighbors across the street.

I recall the Dad arriving first.  Curtains going up within a couple of weeks after his arrival and finally Mom and 2 boys joined them towards the end of summer.  In time to start the new school year.  Our oldest would have been 8 years old, our twins, only 6.  Their oldest boy 10, their youngest boy 7.  I remember ringing the bell, introducing myself and suggesting our kids might want to play together at some point.  She said her boys were quite shy and it may take some time for them to want to mix with ours.  Well, they never really did become friends or anything.  But we did.

We’ve spent many an evening with the Mom & Dad.  Christmas, New Years, parties…. I also worked with the Mom for a year or so.  Some years we would see them often.  Other times, we wouldn’t really see them for months perhaps.  We, our families, were similar in many ways.  For us, our kids and our families were always our first priority. Over the years the Mom and I became pretty good friends.

She recently hired me to do some work for the business she started a few years back, which became very successful.  So, also my first client, so to speak.

Dear friend brought me these lovely flowers Wednesday morning, in appreciation for some of the small things I was helping them with these last few days. 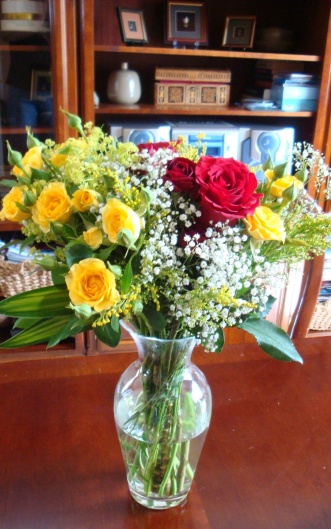 They flew out Wednesday night but because of the usual Doha ‘glitches’ the truck was not loaded until early Thursday morning. 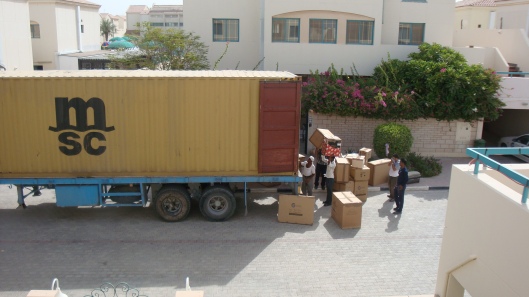 That’s when it hit me.  The doors about to close, I made my way over to make sure the packers had taken everything they were supposed to.  I wandered around the empty house.  Watched the truck pull away.  Thinking about how many hours it would be until they would touch down in Beijing.

Dear husband would like to get to China at some point.  See the Great Wall and all that.  As a travel destination China remained somewhat low on my list.  It may have just moved up a few notches.

In the meantime I may need to focus my attention elsewhere when I first arise each day.  It pains me to think they’re gone.

Today, I feel very much like that lone survivor….

2 thoughts on “A New View Please”