Dear daughter and I were out to buy a gift for THE WEDDING this Sunday, along with some other errands that had to be done .  I looked earlier in the morning for a gift and luckily found a couple of options so a  fall-back plan was in place.   We also needed to pick up the last of the accessories for dear daughter’s outfit to wear… to THE wedding.

Hallelujah! Amazingly we quickly found all that was needed so headed off to the next task at hand.

We were on an unfamiliar route on our way to a supermarket that I don’t tend to frequent often.  Next thing I knew, out of dear daughter’s mouth,

I wouldn’t say a sandcastle really, but I see where she gets the idea.  Have a look. 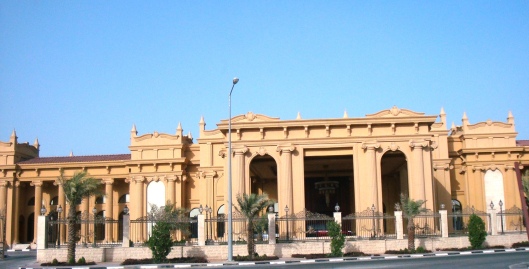 Another house, another castle!

Many of the homes built here are castles by my standards.  If not in appearance, at least in size.  I’ll have to tour around capturing pictures of them all, at some point.  This will take time however, as they’re just too numerous to count.

What is with the size of the homes here?  Is it like most things here whereby they have to build the tallest, the biggest, the best of everything?  (Like ….. the report in today’s Gulf Times – Qatar now has Guinness World Record for world’s largest chandelier.)

We do not live in a big house particularly in comparison to some . Well,  most around here.  Though on some days I have to wonder if even ours is too large.  If  it wasn’t for the fact that we generally eat dinner together, we wouldn’t see too much of one another.  Everyone in their own rooms, connected with their laptops to friends, family, TV, internet, etc.

So what happens in homes that are like 10 times the size of ours?  Do the inhabitants interact at all with one another?  What is all this space for?

Please forgive me if I ever come into a ton of money and you see me living in a huge mansion…. In the meantime I have to wonder if living like this does something to erode the connection between people.  Is it all an illusion, standing tall and magnificent in one moment but with little foundation to sustain it from the slightest disturbance?  A strong wind, a slight tremor, uncommon rains falling from the sky and the walls come tumbling down?

I would say some of our neighbours around the Gulf found their businesses, their homes, their lifestyles took a big tumble over the last couple of years.  Let’s hope Qatar doesn’t fall into the same trap with their economic development plans.

But business aside, perhaps it’s the walls of these sandcastles that need to be more firmly built.  Perhaps there needs examination and reflection of home and family life, as it too can topple from too much excess, too much growth, too much ’empty’ space.

Just like grains of sand our families, our histories,  can unexpectedly be washed away.  That can make for a desolate, dry, barren landscape.  Particularly around these parts.