It’s been a rather strange day.  Along with a couple of emails, I started writing about three different blog posts but can’t seem to finish any of them.

One of the blogs I’ve recently been following is called Marjorie In Qatar.  In a couple of her previous posts she writes about freedom of speech within Qatar, or  rather, whether that statement holds true. DCFM calls for repeal of 1979 press law, Limits on Freedom of Speech: How Much is Too Much?

While writing my last blog post, A Matter of Convenience,  I hesitated and then changed some of the text so it didn’t include a couple of statements I wanted to make, as I wasn’t sure they would be ‘acceptable’ here. Prior to that experience, I hadn’t really considered that anything I would have to say would not be appropriate here, but now I’m not so sure.

The purpose of this platform was not to be an opportunity for me to be making some political statements good or bad. Rather, for me,  it was to be about paying attention to the world around me and offering my personal reflections of that.  In doing so, however, I may at times be criticising others beliefs, opinions, or way of life.  Which might be considered ‘insulting’, something that appears to be against the law here.

This morning I received an email from a man who works for ICT Qatar.  They are the company that hosted the blogging seminar I initially went to back in January, that sparked my interest in blogging.  The purpose of the seminar was to educate, inform and inspire more bloggers from Qatar and the Middle East region.  As a follow-up, today’s email was an inquiry as to whether attendees had taken up blogging.  Obviously I have but I wonder how, or if , blogging will be possible for me here when I have to so carefully consider what I wish to say and then furthermore how I express it.  Therefore, some initial drafts go unfinished for today, at least.

So for now, I’ll just play it safe and post some pictures from the day.

When I woke this morning I checked the news from ‘home’ and it said -1 degree Celsius.  I had to consider what the date was and what the expected weather might be like there at this time of year.

Here, weather is very straightforward and there are no real ‘seasons’ so I tend to lose track of that sort of thing.  Generally we have clear blue skies (very seldom are there ANY clouds here) with the temperatures being either hot, hotter, or hotter with humidity thrown in.  However, driving the kids to school I said to them that when we do at some point move from here one of the things I will miss the most is the predictability of the weather, the clear blue skies and the opportunity for me to sit in a sunbeam each day.

I enjoyed the beauty once again of Aspire Park as I went for my run.  Dear daughter played in a football (soccer) tournament after school and youngest son attended his regular Thursday afternoon Evolution Soccer practise.

water fountains at the park 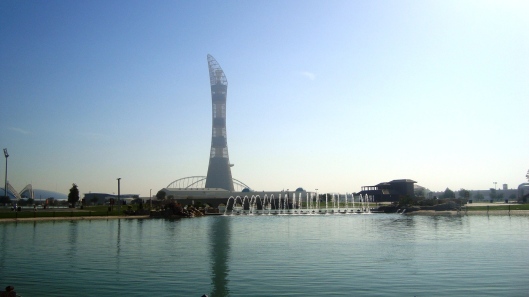 water with torch in the background

ducks in the park

on the playing field

getting ready to make the save